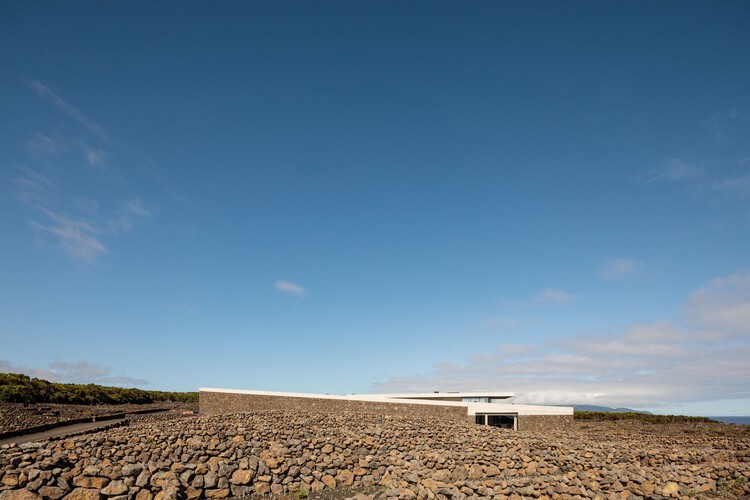 Text description provided by the architects. A new winery for the Azores Wine Company is located in the wine-growing landscape of the UNESCO World Heritage-listed island of Pico, one of the nine islands that form the mid-Atlantic archipelago of the Azores. In a way that is reminiscent of the island’s traditional wineries – small-scale structures along the coast where wine was produced and where family and friends were hosted – the building combines spaces of production with those of conviviality and extended domesticity, within the same coherent form. Reminiscent of the cloistered courtyard typologies of religious institutions, Pico’s most important historic structures, and the communities for which wine was first produced, the building’s simple, geometric massing defines a garden at its center. Enclosed by a covered perimeter, this intimate outdoor space counterpoints the scale of the landscape beyond.

The precision of the plane’s shape is adjusted in sections to follow the rugged terrain, which rises from the windswept rocky coast to the cone of Pico Mountain, the volcano that towers over the island. The shifting relationship between the topography and the horizon is experienced in movement around the reduced form of this cloister-like edge, where a continuous ramped exterior path ascends from the shelter of the boundary wall to approach the landscape.

Along the way, it interacts with a sequence of production spaces, which occupy three of the sides. Arranged in a row, these begin with a series of barrel cellars that climb the slope from the entrance area to reach the red and white wine cellars and finally end with a tasting room that overlooks an upper terrace. . Below, the owners’ house culminates in a series of five guest rooms. These occupy the lower northern edge of the courtyard, backing onto the linear edge of a water retention basin.

Looking through their roof, the terrace offers a vast perspective, encompassing the intense latticework of lava stone walls, called curries, which protect the vines. Beyond, the neighboring islands of Faial and São Jorge snuggle into the vast expanse of the Atlantic Ocean, while turning south, the roof edge frames the cone of the volcano itself.

This concrete curb draws a continuous and rigorous line in the landscape, bringing together the contrasting material character of interior and exterior. Below, the outer wall of the building is stacked dry stone, reclaimed from the vineyard grounds and merging its almost seamless form into the wider network of walls. Inside, the abstraction of the white plaster surfaces alludes to how the island’s most important historic buildings stood out from their agricultural and industrial neighbours.

Thus, an industrial building of a new scale is set in a remarkable and highly sensitive context, in a way that allows it to fit and blend into the twists and turns of the man-made landscape it serves. The first major production unit built for more than a century, the cellar allows the vineyard to rediscover its true vocation and, in doing so, begins a process of overhauling a wine-growing region. One that was once of global significance, but has long been forgotten.

A wine company according to the heart of Roger Scruton